Papa Duck Films
"Cookie" The Movie Casting
Papa Duck is making a movie titled "Cookie." The movie is based off the hit record "Pat Dat Cookie" by Papa Duck (watch video here http://youtu.be/eFS6yQSfmVo). "Cookie" is about a girl who moves and is introduced to stripping and overcomes the obstacles of everyday life. We are looking to fill all the roles in the movie except Papa Duck, Cookie, and Nicole. We are looking for actors, actresses, make-up artist, etc with a little experience. Some of the female roles will require the women to be dressed as a stripper so keep that in mind. If you are interested in auditioning for a role in the movie please list which character you would like to play, send resume with contact info, and any acting footage you have to papaduckcastingcall@gmail.com or call 404-549-1180. If you would like us to send you a copy of the script please request it in your e-mail. Thank you for interest and we hope to hear from you soon.

CHARACTER/ ROLES
-COOKIE-(MAIN CHARACTER)A YOUNG LADY THAT LIKES TO MAKE MONEY AND DONT CARE WHAT IS TAKES.AND LOVES HER FAMILY DEARLY
-NICOLE-(COOKIE SISTER)(me)A HOE.SHE LOVES HAVING KIDS
-STACEY-(COOKIE COUSIN)18 YR OLD FEMALE THAT WANTS TO BE LIKE COOKIE.A STRIPPER.SHE WANTS TO FIT IN WITH SHAWNI CLICK SO BADLY.
-MOTHER-(COOKIE MOTHER)SHE LOVE HER KIDS,DONT WANT NOTHING TO HAPPEN TO THEM,SO SHE WANTS TO PROTECT THEM
-SHAWNI-A JEALOUS STRIPPER THAT INTRODUCES COOKIE INTO STRIPPING.
-SHAN-A STRIPPER THAT HANGS WITH SHAWNI
-RECE-A STRIPPER THAT HANGS WITH SHAWNI
-GIRL 1-SHE INTRODUCE COOKIE TO SHAWNI THEM
-CASEY-ONE OF NICOLE BABY FATHERS.MAYBE!
-PAPA DUCK-OWNER OF THE STRIP CLUB(The Duck House)
-LEE-A GUY THAT USE TO BE SHAWNI PAYER,BUT IS NOW COOKIE PAYER.
-GIRL 2-COOKIE DAUGHTER
-BOY 1-COOKIE BABYFATHER
-CARAMEL,CHERRY,MISS K,ICE DIAMOND(SCENE 10)AT THE STRIP EDITION WHEN THEY ALL HAD TO SHOW WHAT THEY GOT IN ORDER TO BE CONSIDERED ON PAPA SQUAD.
-GIRL 3-(SCENE 16)A STRIPPER THAT CONVINCES STACEY TO KEEP THE BABY.
-BOY 2-(SCENE 25) A GUY THAT BEATS UP STACEY
-GIRL 4 & 5-(SCENE 32)TRYS TO FIGHT WITH COOKIE AND NICOLE IN WALMART.
-DOCTOR-THAT HELPS NICOLE DELIEVER BABY #6
-DOCTOR SHERRY-(SCENE 37)STACEY DOCTOR
-CLUB DJ-(SCENE 40)
-BOY 3-(SCENE 43)

Percy Miller and Radric Davis head the cast of Get Money a dramatic and comedic film that examines a street hustler and philosopher experiencing a mid-life crisis. Miller aka Master P plays Monster a southern street hustler who has a way with words and women.
There’s no success without struggle. He’s 33 with kids and a good woman at his side that wants him to change his life. Monster has been chasing his music dreams for a while but he feels like his opportunities are slim to none. Therefore, he continues to live the street life.
Radric Davis aka Gucci Mane playsBig G, Monster’s long time friend and partner in crime. Even though they get money together on the streets, Big Gbelieves that they have real talent and street credibility that could get them out of the hood and into the Hip Hop music business.
Distracted by poverty, they hit a lick worth one million dollars from a rival gang. Meanwhile, Monstertries to balance his street life with his family life at home. His fiancé Precious constantly tries to convince him to get out of the game but it seems like it’s no use because the streets keep calling him back in. Monster and Big G find themselves in a deadly game in which death hits close to home. They have a choice to make… the love for their family and their music or the money and respect from the streets. Hip Hop’s most loved bad guys, the Ice Cream Men are back to take their talents to the big screen in the most anticipated street movie of 2011. Get Money!
Additional cast members include Miss Chee, Meek Mill, Michael Blackson, Meagan Good, Bengie, Gangsta, OakTree, T-BO, Kay-i, Eastwood, Silkk The Shocker, G5J, AJ Johnson and Terry Miles.
Original soundtrack inspired by the motion picture. Executive produced by Master P and Gucci Mane. Produced by No Limit Forever Films in association with Brick Squad. This film is rated R.
Movie and soundtrack coming August 2011.
Hollywood True Report says, “Get Money is the modern day King of New York.”
For more information, go to http://www.NoLimitForeverFilms.com or http://www.NoLimitForeverRecords.com or Getmoneymovie.com
**Courtesy of www.NoLimitForeverRecords.com**
Posted by Unknown at 7:17 AM 0 comments

Congrats to our homegirl, "Urban Model" Ebony Lavette for being featured as Web Candy on XXL Magazine's website.  Visit XXL's site for full write up here.

Photography courtesy of MyKeon Smith- Magic City Studio
REPS: Cleveland, OH
STATS: 36-25-45
CAREER HIGHLIGHT: “My first magazine cover – Stunnaz Magazine [in] May 2010.”
FAVORITE ARTIST: “Nas. He’s definitely more than a rapper; he’s a revolutionary. Every rhyme forces us to think outside of the norm, and every time I hear a rhyme from him I hear something different no matter how old or how many times I’ve heard the song.”
FAVORITE VIDEO: “LL Cool J featuring Total, ‘Loungin’ (Remix)’. Everything about that video was dope. Funk Master Flex had the crowd going crazy, and the best part was the late, great Biggie pushing the Lexus Coup. That video is classic.”
DREAM MODELING JOB: “A Hype Williams video. He’s very creative, and he’s a legend.”
Check out the full story here:
Ebony LaVette, Round, Soft & Natural [Web Candy x Gallery] | XXLMAG.COM 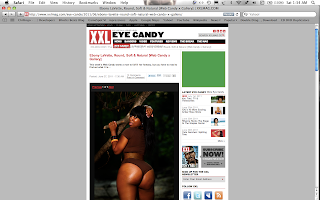 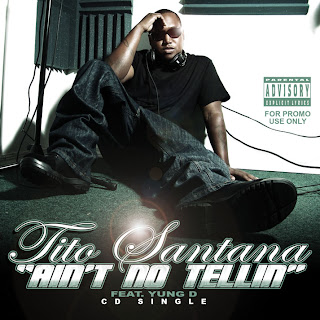 [NEW VIDEO] Rue Davis "Take Me Back to Farish St."

[NEW VIDEO] LaSha Jackson "Can I Get Seconds"

YouTube music video for Rhythm & Blues recording artist,
LaSha Jackson
from her forthcoming album:
"Where Was Yo' A** Last Night?"
COMING SOON!!!! 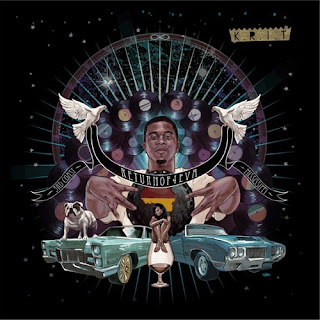 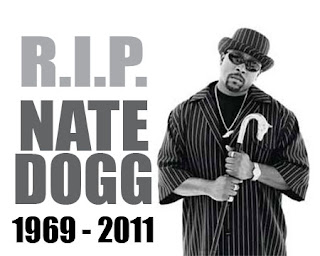 One of the most distinct voices of the G-funk era in hip-hop, rapper Nate Dogg, passed away yesterday, March 15th, the rapper's family confirmed to the Hollywood Reporter. He was 41. Nate Dogg, born Nathaniel D. Hale, had suffered strokes in both 2007 and 2008, but his cause of death was unclear at press time. Often recruited to adorn choruses in Death Row Records' glory days, Nate Dogg exploded onto the music scene as Warren G's gat-busting partner-in-crime on the hit "Regulate." Nate also frequently collaborated with his high school friend Snoop Dogg, Kurupt, Tupac Shakur, Eminem, and 50 Cent.The biggest tracks to feature Nate Dogg, a four-time Grammy nominee, include Dr. Dre's "The Next Episode," Ludacris' "Area Codes," 50 Cent's "21 Questions," Eminem's "Shake That" and, our personal favorite, his own solo track "Never Leave Me Alone" with Snoop Dogg. In addition to appearing on every great rap album from The Chronic to Doggystyle to All Eyez on Me to Get Rich or Die Tryin', Nate released three solo albums on his own. He also made the "Eastside Hotel" one of the most famous locales in hip-hop history.
"We lost a true legend in hip-hop and R&B. One of my best friends and a brother to me since 1986 when I was a sophomore at Poly High where we met," Snoop Dogg said on Twitter. "You will always be with me forever and a day. You put the 'G' in 'G funk', you put the '1' in '213' and you put your stamp on everybody you ever did it with. I miss you because I am so sad but so happy I got to grow up with you, and I will see you again in heaven, because you know the slogan about 'all doggs go to heaven.' "

Story Coverage Courtesy of Yahoo News: http://new.music.yahoo.com/blogs/amplifier/88675/g-funk-legend-nate-dogg-dead-at-41/
Posted by Unknown at 10:19 AM 0 comments 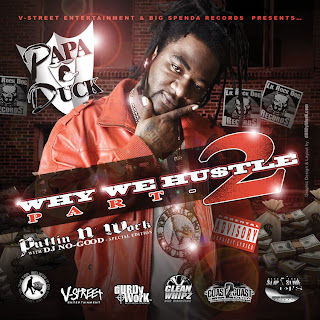 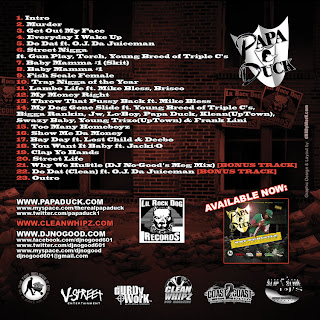 Could Strokers possibly be America's Favorite Strip Club?  I Stumbled upon this site and was shocked to find that they actually host pics of their most current stable of talented stallions.  Haven't been to this club personally but from the looks of their website www.strokersclub.com, the joint seems very promising!  Next time I'm in ATL, I'll have to check them out!  Until then, guess I settle for a sneak peek over at:  http://strokersclub.com/girls.php

P.S. If you get there before I do or have already been, please leave a comment about your experience below.
Posted by Unknown at 3:50 PM 0 comments

Rappers Meek Mill, Big K.R.I.T, Cyhi The Prynce, Lil Twist, Yelawolf, Fred The Godson, Mac Miller, YG, Lil B, Kendrick Lamar & Diggy Simmons grace the cover of XXL Magazine's upcoming 4th Annual FRESHMAN ISSUE!!!!  The 2011's Freshman Issue is due to hit shelve for April.  Be on the look out for these hot new artists as they attempt to make their mark in this game called Hip-Hop.