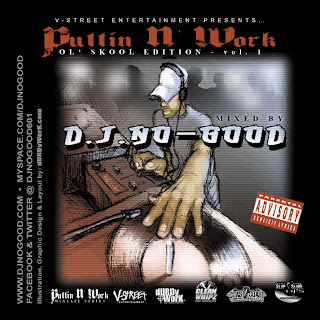 PUTTIN N' WORK - Ol' Skool Edition vol. 1, consist of raw, un-cut & gritty "Gangsta Rap" from the early to mid 90's.  This well blended mix contains classic tracks from: The Geto Boys, Outkast, DJ Quik, 8 Ball & MJG, UGK, The Dayton Family, E-40, Too Short and many more…  This is a must have for any lover of Old School Hip-Hop.

Download your FREE copy Exclusively, here @ www.djnogood.com
Posted by Unknown at 2:50 AM 0 comments

Tito Santana, formerly Mista Tito, started hustling at an early age, in the streets of his hometown, Memphis, TN. Raised on the North Side of the city, during the mid 90’s he hooked up with Southern Rap Legend, Playa Fly and began to pursue a career in music. As a member of the entourage, Tito honed his skills as a rapper and hype man while touring the country with his earlier mentor.

Tito is best known for his guest appearance on Playa Fly’s “Universal Heartthrob” which was featured on Fly’s “Fly2K” (2002) release. He also made an appearance on Producer Montana Trax’s “The Boy Something Great” (2006) album which featured the record “Peep My Campaign.”
In 2009, Tito launched his own imprint, I Eat U Eat Records, Inc., and began recording material for his upcoming debut album, currently titled, “Please Remember The Name: I AM TITO SANTANA.” A release date has not been announced, but it is tentatively scheduled to be released later this year. At the present moment, Tito is promoting the release of his new single, “I Be Ballin” which was produced by Chicken (for Sweat Da Track Productions).
In the weeks to come, the label will begin to seek for “I Be Ballin” to be added to select radio stations’ playlists and mix shows. Through a multitude of social networks “I Be Ballin” (Street Version) has gained over 1,000 digital downloads, with little promotion, and is available for exclusive download at http://www.limelinx.com/files/6799d91ff9ef4045c364f00f893b2707. The Radio Version is also available for download at http://www.limelinx.com/files/84925e6c6ceb4dae38f0cae662429d4c.
As of recently, the label launched Tito Santana’s Official YouTube Channel, http://www.youtube.com/titosantana901, and will be releasing exclusive video footage through a host of viral campaigns. In addition to working on several soon to be released mixtapes, Tito and his management are prepping a promo tour in support of his newly released single to garner more support from DJs in primary and secondary markets. He elaborates, “With me being a new artist, I’m truly humbled by of all of the love and support I’ve received thus far. I’m looking to network with any and everybody about business. I eat, you eat, and that’s my motto. So let’s build, get money and break bread together.”
For additional information on I Eat U Eat Record’s recording artist, Tito Santana, concerning public relations, features, booking, appearances, interview requests, mixtape hosting, drops, etc. please visit http://www.myspace.com/titosantana901, http://www.facebook.com/titosantana901 and http://www.twitter.com/titosantana901 or please contact I Eat U Eat Records, Inc. at (612) 282-4255 or S&S Management at (901) 591-0098 or email a representative at titosantana901@gmail.com.